Roasted Corn on the Cob with Cilantro Lime Butter 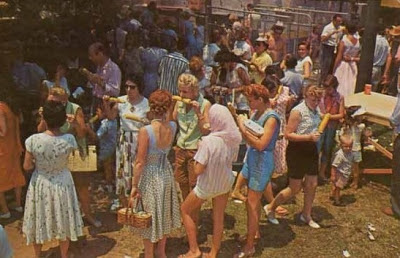 With Memorial Day right around the corner, it's that time of year again for a dutch oven corn on the cob recipe.  This Roasted Corn on the Cob with Cilantro Lime Butter roasts the corn while also steaming it in the flavored butter.  The cayenne gives it a touch of heat and the combination of fresh cilantro and lime seeps between the kernels promising you a burst of flavor with every bite.
You'll need to use smaller ears of corn to fit in your dutch oven.  Only four wrapped ears fit in my 10 inch oven, use your 12 inch, or even better, a deep oven for the full amount of corn.  Of course doubling or tripling the recipe in a large dutch oven will feed a crowd, plan on two ears per person because everyone will be wanting seconds.  In my 10 inch dutch oven they roasted for 30 minutes with 10 coals in a ring around the bottom and 22 on the lid.  Wrap the foil tightly as some of the butter will seep out.  Trust me, the cobs will be picked clean because nobody will want to miss a drop of this yummy corn.