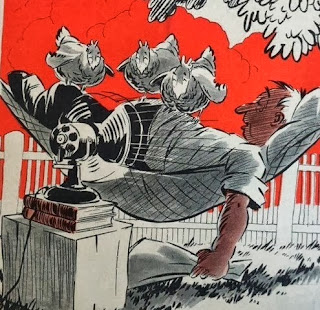 I'm always drawn to a recipe that has 'easy' in the title.  This three ingredient Easy Chili Chicken from Food.com is perfect for outdoor cooking because you can prepare the chicken at home, pop the zip lock bag in your cooler and cook it at your destination.  You don't even have to marinate the chicken at all, you can mix it and bake it right away but if you do let it sit in the marmalade mixture, the flavors will be more intense.  The chicken baked in my 12 inch dutch oven with 12 coals in a ring around the bottom and 28 briquettes spaced evenly on the lid.  Lining your oven with parchment or foil will definitely make clean up easier.  These juicy drumsticks are sweet, spicy and with all the ingredients costing less than six dollars, extremely economical.

Lightly oil or spray 12 inch or larger dutch oven.
Mix marmalade, chili powder and salt until well combined.
Place drumsticks in a large zip lock bag.
Pour marmalade mixture into bag, mix until chicken is completely coated.
Refrigerate until ready to bake.
Arrange chicken in a single layer in prepared dutch oven.
Pour any excess marmalade mixture over chicken.
Bake at 400 degrees for 40 minutes or until chicken is cooked through. 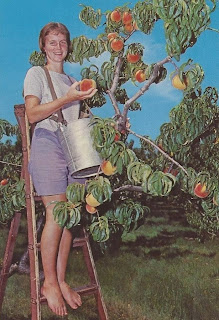 I have never tried a recipe from Ina Garten that I didn't like and her Fresh Peach Cake is no exception.  It may seem complicated but once you mix the batter, it's just a matter of lighting your coals and layering the cake in your oven.  In my 10 inch dutch oven the cake baked for 45 minutes with 10 coals around the base of the oven, 15 around the outside of the lid and 4-5 placed evenly in the center.  I was yakking on the phone while it was baking and lost track of the time, but I would suggest checking it after 30 minutes to make sure it's not browning too quickly.  Since it does rise a bit, you may have to rotate the lid halfway during cooking time.  Treat yourself to a warm slice, ripe juicy peaches make this buttery cake very moist and deliciously sweet.

Lightly oil or spray 10 inch dutch oven; line with parchment paper.
In small bowl, combine 1/2 cup sugar and cinnamon; set aside.
In large bowl, using electric mixer, beat the butter and remaining 1 cup of sugar for 3 to 5 minutes, until light and fluffy.
With mixer on low, add the eggs, one at a time, then the sour cream and vanilla; mix until batter is smooth.'
In separate bowl, sift together the flour, baking soda, baking powder and salt.
With mixer on low, slowly add the dry ingredients to the batter and mix just until combined.
Spread half of the batter evenly in prepared dutch oven.
Top with half the peaches, sprinkle with two-thirds of the cinnamon-sugar mixture.
Spread the remaining batter on top, arrange the remaining peaches on top.
Sprinkle with remaining cinnamon-sugar mixture and the pecans.
Bake at 350 degrees for 40-45 minutes or until tester inserted in the center comes out clean.
Allow to cool in dutch oven for 30 minutes before lifting out with parchment paper.
Serve warm or at room temperature.

A landmark of The Old West, the Long Branch Saloon in Dodge City, Kansas was the old stomping grounds of the legendary Wyatt Earp, Doc Holliday and Bat Masterson.  William Harris, one of the original owners of the famous watering hole, actually named it after his hometown in New Jersey.  This rich and cheesy chowder is brought to us by the Longbranch Company, they sell and produce their own brand of bloody mary mix called, Bloody Mary Zinger.
The key to making this tasty chowder is having all of your ingredients prepared in advance.  Once the onions and celery have softened, things move along rather quickly.  I made it in my 10 inch dutch oven and it took about 25 minutes start to finish.  Pile as many coals as you can under your oven, after I added the corn, I covered the soup with about 10 coals on the lid to help bring it to a final simmer.  This filling chowder is so thick you can almost stand a spoon in it, and so cheesy you can even scoop it up with tortilla chips.

Over a full compliment of coals, melt butter in dutch oven.
Add celery and onion; saute until onion is tender.
Whisk in flour and cook for two minutes.
Whisk in half and half and bloody mary mix.
Stir over heat until smooth and thickened.
Add Cheddar and whisk until melted.
Add tomatoes, chilies and corn; stir until well combined.
Cover with as many coals on the lid as needed to bring soup to a simmer.
Simmer for 10-15 minutes or until corn has thawed completely and chowder is hot.
Makes 6-8 servings. 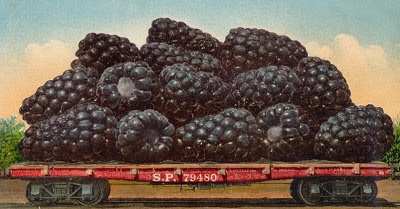 I was lucky enough to find a huge package of blackberries for ninety nine cents on the marked down produce rack at the grocery store.  This recipe from Southern Living jumped out at me because it had such rave reviews and is made with so few ingredients.  Whisk the batter, sprinkle with blackberries and sugar and in one hour you have a homemade, mouth watering dutch oven desert.  In my 10 inch oven it baked with 10 coals in a ring around the bottom, 16 around the edge of the lid and 6 evenly spaced in the center.  Once I put the coals on, I didn't even lift the lid to check it and in exactly 60 minutes it was perfectly browned, bubbling and ready for a big scoopful of vanilla ice cream.  If you're new to dutch oven cooking give this cobbler a try, it's pretty much foolproof and everyone will think you're a seasoned outdoor chef. 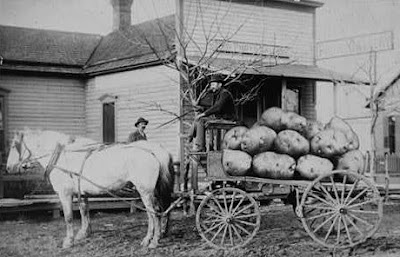 This recipe from Hunt's is a good way to use some of the fresh vegetables from your summer garden.  You do need to roast them in a hot oven, in my 12 inch dutch oven they cooked for a total of 50 minutes with 12 coals in a ring around the bottom and 28-30 on the lid.  If you can't use fresh herbs use the dry ones but cut the the amounts in half.  Healthy, colorful and a good recipe if you're cooking in the back country, none of the ingredients requires refrigeration.

Lightly oil or spray 12 inch or larger dutch oven.
Place potatoes, onion and garlic in prepared oven.
Drizzle with olive oil and toss together.
Bake at 400 degrees for 20 minutes.
Stir in drained tomatoes, eggplant, zucchini, basil, oregano, salt and pepper.
Bake for 30 minutes more or until desired doneness.
Makes 8-10 servings as a side dish.

Posted by Lid Lifter at 4:00 AM No comments:

Email ThisBlogThis!Share to TwitterShare to FacebookShare to Pinterest
Labels: Side Dish, Vegetables 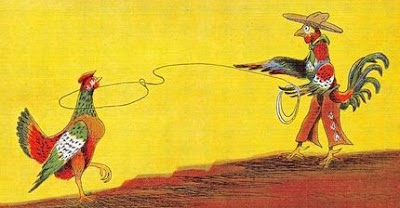 Since you have been such adventurous dutch oven cooks and loyal followers of my blog, I am going to share with you my sister's, mother in law's top secret recipe for Lemon Chicken.  Amanda's Lemon Chicken is legendary in our family, my nephews have been raving about it for years.  She is a fantastic cook and an amazing woman who once, while on a camping trip, single-handedly shot a rattlesnake while it was preparing to strike at her husband.
You need to make this in your 12 inch or larger dutch oven.  I started with 12 coals in a ring around the bottom and the lid covered with 28-30 briquettes.  It needs to bake for an hour and if you don't want to relight the coals, start with a generous amount.  Place the top side of the chicken down first, that way, when you turn it over at the halfway mark, it will be golden brown when you're ready to plate.  You simply must serve this with mashed potatoes, rice or a good crusty bread to soak up the heavenly sauce and thank you Amanda for sharing your incredibly delicious recipe.

Apple Pie Inside an Apple 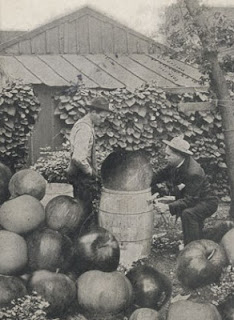 If you're in the mood for a slice of warm apple pie, these baked apples from Betty Crocker give you just as much flavor with a lot less effort.  Hollowed out apples are stuffed with canned apple pie filling, topped with ready made refrigerated pie crust and baked in your dutch oven.  Cleaning out the apples is easy if you use a large spoon and turn it as if you are coring the apple.  I found one can of pie filling to be just the right amount for four large apples.
In my 10 inch deep dutch oven, I baked the apples for 40 minutes with 10 briquettes in a ring around the bottom, 16 in a ring around the edge of the lid and 6 spaced evenly in the middle.  Whatever dutch oven you decide to use, make sure there is enough clearance between the pie crust and the lid of your oven.  I baked mine a little longer because I wanted the apples to be very tender but you can vary the cooking time.  Braeburn apples are very sweet and probably cook faster than a Granny Smith.  You can also cover them with a lattice top or use a cookie cutter to shape the dough.  Believe me, you'll never miss the bottom crust with these delicious dutch oven mini-pies.

Lightly oil or spray dutch oven; line with parchment paper.
Cut tops off apples; using a spoon, hollow out apples, leaving approximately 1/2 inch shell.
Squeeze lemon juice into each apple as it's hollowed out to prevent discoloration.
Place apples in prepared dutch oven.
Spoon one quarter of pie filling into each apple.
Unroll pie crust on work surface.
Using small inverted bowl, cut 4 circles of dough.
Place cutouts on apples, pinching sides to secure.
Cut a small opening in each to allow for venting.
Using a pastry brush, brush each with egg wash.
Bake at 350 degrees for 30-40 minutes or until crust is golden and apples are tender.
Let apples cool for 15 minutes before serving.
Recipe can easily be doubled or tripled.