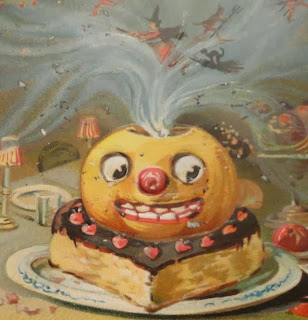 I have been wanting to try this recipe from Trader Joe's for the longest time, it has received rave reviews and the combination of chocolate and pumpkin sounded too good to resist.  I apologise to those of you who do not live near a Trader Joe's market, you might be able to duplicate the recipe with similar boxed mixes.  The Trader Joe's brownie mix is very thick and loaded with chocolate chips so look for a brand that is similar.  In my 12 inch dutch oven, they baked for 45 minutes with 12 coals in a ring around the bottom, 16 around the outside of the lid with 8 briquettes spaced evenly in the center.  Be sure to test them with a toothpick before removing from the coals.  The aroma of pumpkin, spices and chocolate billowing from my oven made it impossible for me to wait for them to cool.  Splurge by serving them with a big scoop of pumpkin ice cream and if you fall in love with this recipe like I did, stock up on their pumpkin bread mix because it only comes around once a year.

Lightly oil or spray 12 inch dutch oven; line with parchment paper if desired.
In a large mixing bowl, prepare Brownie Truffle Baking Mix according to package directions.
In another large mixing bowl, prepare Pumpkin Bread Mix according to package directions.
Spread brownie batter evenly in prepared dutch oven, batter will be thick.
Pour the pumpkin mixture over the brownie mixture.
Using a large stiff spatula, swirl the two mixes together to make a marble effect.
Bake at 350 degrees for 40-45 minutes or until toothpick inserted in center comes out clean.
Cool before lifting from dutch oven and cutting into squares.