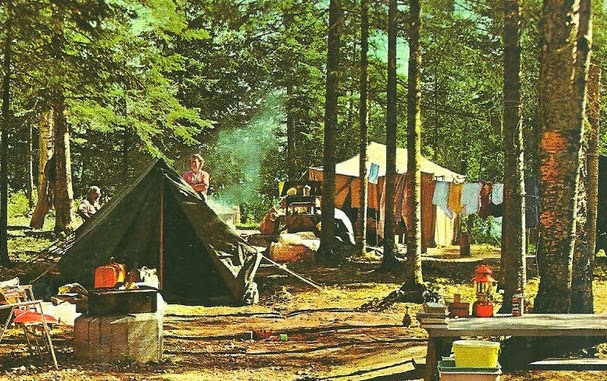 Adapted from this recipe I found on the Just A Pinch website, these bacon wrapped ribs are seriously good and just made for dutch oven cooking.  Really, is there anything that doesn't taste better when wrapped in bacon?  Juicy on the inside and crispy on the outside, applewood smoked bacon paired with a hickory barbecue sauce made for a winning combination.  In my 10 inch dutch oven, I started with 10 coals in a ring around the base of the oven with 26 briquettes on the lid.  I left them alone and in spite of the wind and chilly temperatures, in one hour the steam was pouring from my oven and they were perfectly done.  This recipe can easily be doubled or tripled, depending on the size of your oven.  Just be sure to bake them in one layer and don't cover them with too much sauce, you want the bacon exposed to the heat, otherwise it will become soggy.

Lightly oil or spray dutch oven.
Cover bottom of dutch oven with half of barbecue sauce.
Wrap each rib with two slices of bacon; secure bacon with toothpicks.
Place ribs in single layer in dutch oven.
Spoon remaining sauce evenly over ribs.
Ribs should not be swimming in sauce.
Bake at 350 degrees for one hour or until bacon is crisp on top and ribs are tender.
Recipe can easily be doubled and baked in larger dutch oven.