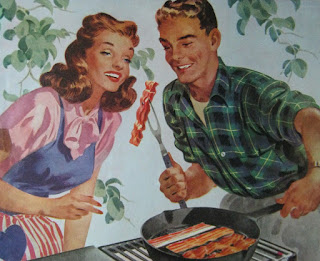 I was thinking of this recipe today while I was swimming, it's terrible, I know, to be obsessing about food while you're trying to burn off calories but since anything tastes good wrapped in bacon, I thought, why not potatoes?  I searched the Internet and found that various versions of this recipe have been around for a while now.  If you only have large potatoes you can cut them into wedges, wrap them tightly with bacon and basically cook them the same way.  In my 10 inch dutch oven, they baked for 55 minutes with 10 coals in a ring around the base of the oven and the lid completely covered with briquettes.  I started with a blazing hot oven and left it undisturbed for almost an hour, when I smelled the bacon I knew they were done.  Double or triple the recipe if you're feeding a crowd.   Crisp on the outside and fluffy on the inside, serve these dressed potatoes for breakfast, as an appetizer or as a side dish with dinner, I guarantee they will fly off the plate.

Potatoes Wrapped in Bacon
12 New or fingerling potatoes, washed and dried thoroughly
6 slices of bacon
Salt and pepper to taste

Lightly oil or spray dutch oven.
Cut bacon strips in half.
Wrap each potato tightly with halved bacon strip.
Place wrapped potatoes side by side in dutch oven.
Add salt and pepper to taste.
Bake at 400 degrees for 50-55 minutes or until bacon is crisp and potatoes are tender.
Serve warm with sour cream, chives or softened butter.