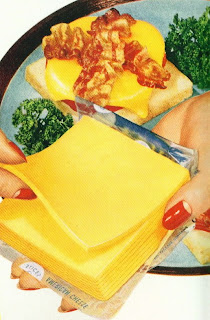 When I was growing up one of our favorite snacks used to be what our family called Cheese n' Bacons.  Their ingredients would horrify the American College of Cardiologists today but back then they sure were delicious and considered a real treat.  Basically they were open faced sandwiches on white bread with a slice of bacon on one side and piece of cheese on the other.  We would stick them under the broiler until the bacon was cooked, the cheese was bubbly and the bread crisp and browned around the edges.  Of course the bacon fat would soak into the bread rendering it smokey and rich.  I had a loaf of French Bread in the house and thought of a way I might be able to reproduce the flavor of those yummy sandwiches.  This is a grown up version of Cheese n' Bacons, I used half a loaf of French Bread sliced down the middle and it fit perfectly in my 12 inch dutch oven.  Bake the bread with 12 coals around the bottom and 20-22 on the top, check it after 15 minutes and cook it until the cheese is bubbly and brown.  You could really have fun playing around with this recipe, try pairing diced green chilies with cooked chorizo and a Mexican blend of cheese.  You could also use Italian sausage with Mozzarella and chopped fresh basil.  The butter, mayo and cheese give you a great starting point to add whatever you might have on hand, leave out the meat altogether if you are a vegetarian.  This crispy, cheesy bread could be a meal in itself, it's sinfully good and brings back all kinds of comforting memories of my childhood.

Lightly oil or spray 12 inch dutch oven.
Mix butter, mayonnaise, butter, cheese, Worcestershire sauce, Tabasco, scallions and bacon in medium bowl.  Stir until well blended.
Cut French Bread down the middle forming two halves.  Spread each half generously with cheese mixture until bread is completely covered.
Place side by side in bottom of prepared dutch oven.  Bake at 375 degrees for 15-20 minutes or until cheese has melted and browned.  Slice with serrated knife and serve warm.