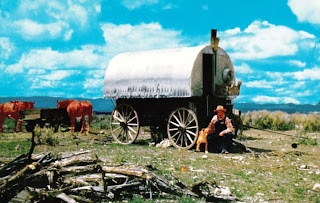 You'll never miss the meat in these Greek Stuffed Peppers from Martha Stewart.  Filled with couscous, feta cheese and cannelini beans, the great thing about them is that you don't have to cook any of the stuffing ingredients beforehand.  The couscous fluffs up and steams along with the peppers.  I baked them in my 10 inch oven with 10 coals around the bottom and 22 on the lid, in 45 minutes they were tender and brown on top.  When they were ready I topped them with a sprinkling of cheese and let them cook for 5 minutes longer.  I should have known better by now but stuffed peppers always cook better in a 12 inch oven, smaller ovens are just a wee bit on the shallow side.  Filling, healthy and a terrific entree to make for the vegetarians in your family, these peppers can easily be assembled at home or by the campfire.

Lightly oil or spray 12 inch dutch oven.
Slice off tops of peppers below stems; remove ribs and seeds from peppers.
In medium bowl mix beans, feta, couscous, scallion whites, garlic and oregano.
Season with salt and pepper and toss to combine.
Stuff peppers with bean mixture, place in bottom of prepared oven.
Pour water around peppers.
Bake at 350 degrees for 45-50 minutes or until peppers are tender.
Top with cheese during the last few minutes of cooking time if so desired.
Garnish with green scallions before serving.

Email ThisBlogThis!Share to TwitterShare to FacebookShare to Pinterest
Labels: Main Dish, On the Lighter Side, Stuffed Peppers, Vegetables