Pan Seared Corn on the Cob 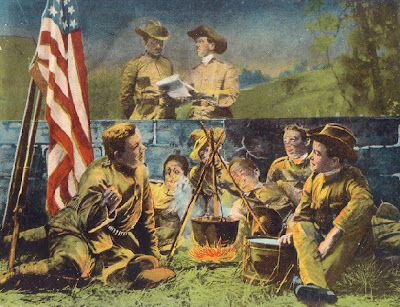 Today we honor the men and women who have so bravely served our country, who have given their lives in action fighting for our freedom.  It is also the official kick off of outdoor cooking and summer barbecue season.  This recipe for Pan Seared Corn on the Cob from Parent's Magazine is a very unique and unusual way of preparing it and a method I thought could be easily applied to your dutch oven.  This was my first corn on the cob of the year, although not locally grown, still very sweet and delicious.  At our favorite farm stand they recommend cooking corn for no more than 3 minutes in boiling water.  By sauteing the corn briefly in a hot pan it comes out crisp tender with all the flavor locked into every bite.  In my 12 inch dutch oven, I sauteed the ears in olive oil over a full spread of freshly lit, blazing hot coals.  The corn sizzled when it hit the oil, at first I thought it was going to start to pop.  After it starts to brown, stir in the butter and garlic then add the water and vinegar.  Cover your dutch oven immediately after adding the water (no coals needed on the lid), you want the steam to finish off cooking the corn.  What is left behind is a browned butter, garlicky sauce with a hint of sweetness.  If you don't feel like lighting the coals for such a quick recipe, give it a try in your cast iron skillet or covered saucepan.  Once you taste this you'll never go back to overcooked, mushy, boiled corn again.  One other point, be sure to use ears of corn that will rest on the bottom of your dutch oven and I think you could easily double the recipe if you're feeding a crowd.  If you want to simplify this method of cooking corn, just brown it in a little olive oil, add water, cover then steam for 5 minutes or until tender.

Combine water and vinegar in a small bowl; set aside.
Heat olive oil in dutch oven over a full compliment of freshly lit coals.
Add corn and cook, turning occasionally, until browned in spots, 5-7 minutes.
Add butter and garlic, stirring constantly until fragrant but garlic is not browned, about 30 seconds.
Carefully pour in water and vinegar mixture (it will bubble vigorously).
Immediately cover, and cook, gently shaking the dutch oven, until the corn is crisp-tender, about 3-5 minutes.
Remove from heat, sprinkle corn with parsley, salt and pepper, turning to coat.
Serve with garlic and parsley sauce spooned over each cob.