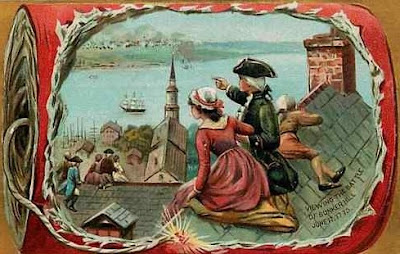 Fourth of July reminds us of the American colonists, their struggle for freedom and the challenges they faced settling their new world.  Grunts were born of necessity, primitive cast iron pots and spiders were used with local fruits to recreate English plum puddings.  Originating in New England, grunts are similar to cobblers only the biscuits or dumplings are poached in the simmering liquid of the sweetened fruit.  Often served for breakfast, they were named after the sounds made from the sputtering juices escaping from beneath the dough.  A grunt made in your dutch oven is as close as you can get to replicating this colonial dish.  To make an authentic grunt, the lion's share of heat has to come from beneath your dutch oven, otherwise the biscuits will brown and bake resulting in a crispy cobbler.
For best results, make this recipe from King Arthur Flour in your 10 inch dutch oven.  I started the fruit over a full compliment of 26 blazing hot coals.  You need the heat to bring the fruit and liquid to a strong simmer.  At this point I did place about 16 coals on the lid, only to raise the internal temperature quickly.  While the blueberries are cooking, now's the time to finish off your biscuits by cutting in the butter while it is still cold.  After 15 minutes, or when the steam was pouring out of my oven, I plopped  spoonfuls of the biscuit dough into the bubbling sauce.  The cold batter instantly lowered the temperature of the fruit mixture so I immediately covered the dutch oven and left 8 coals spaced evenly in a ring around the edge of the lid.  In 20 minutes the dumplings were cooked to perfection and the fruit had transformed into a thickened syrup.
You can also make this in your cast iron skillet but you somehow need to cover the dumplings once you drop them into the blueberries, aluminum foil will do the trick if you don't have a cover to your pan.  Don't be fooled by this recipe's name, the biscuits are light, delicate and absorb the flavor and sweetness of the berries.  With a side of good vanilla ice cream, this is a blue ribbon dessert and one that will make you feel connected to the past, have a safe and happy Fourth of July!

Lightly oil or spray dutch oven.
In large bowl, combine blueberries, water, sugar, lemon juice and cinnamon until well combined.
Pour berries into prepared dutch oven.
Place dutch oven over a full compliment of coals with as many coals on the lid as needed to bring berry mixture to a bubble.
While berries are simmering prepare biscuit dough.
In large bowl, combine flour, baking powder, baking soda and salt.
Using fingers or pastry cutter rub in the butter until texture resembles coarse crumbs.
Quickly stir in the buttermilk.
Drop the biscuit dough in blobs over the simmering blueberry mixture.
Remove most of top heat, biscuits should simmer like dumplings, not bake.
Cover and cook until the biscuit dough is done, about 20 minutes.
Serve warm with blueberries spooned over the biscuits.