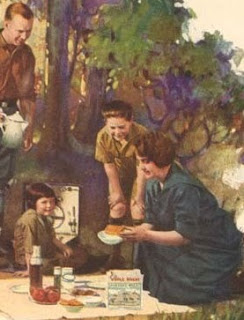 What I like about this recipe from Pillsbury is that it is actually better to assemble the casserole before lighting your coals, the extra sit time will allow the egg mixture to soak into the uncooked dough.  Also, to save time, snip the cinnamon rolls into small pieces using a pair of kitchen shears.  In my 12 inch dutch oven, it baked for exactly 25 minutes with 12 coals in a ring around the base of the oven, 18 placed around the edge of the outside lid and 8-10 briquettes spaced evenly in the center.  You'll know it's done when the overpowering scent of cinnamon is wafting from your oven.  My sister is visiting and was pleasantly awakened by the aroma of cinnamon maple french toast coming through the guest room window.  Once it has puffed, is golden brown and firm to the touch in the center, remove it from the coals.  It will fall as it cools, drizzle it with icing, sprinkle it with powdered sugar and top it off with more maple syrup for an unbelievably sweet and delicious dutch oven breakfast.