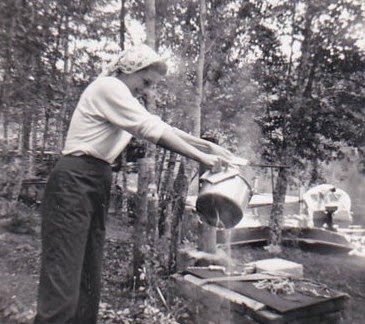 I've had my eye on this recipe for a while and was waiting until I had company to make it.  Conveniently made with Pillsbury Grands Cinnamon rolls, the prep work only requires melting a stick of butter, snipping the dough into quarters and rolling it in the cinnamon sugar mixture.  Keep your refrigerated rolls as cold as possible until you're ready to assemble them, otherwise the warm dough will become sticky and hard to handle.  In my 12 inch dutch oven, the coffee cake baked for a total of 30 minutes with 12 coals in a ring around the base of the oven, 18 briquettes placed around the rim of the lid with 10 spaced evenly in the center.  When you can smell the cinnamon it's probably done.  Lining your oven with parchment will make for an easier clean up while you're camping and be sure to serve this unbelievably good monkey bread-like cake warm so you can scoop up all the gooey caramel from the bottom.