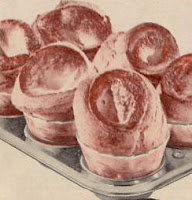 Ah, the best laid plans of mice and men.  My Dad needed some cheering up today so I thought I would surprise him with a basket of freshly baked popovers.  Since I have had such good luck with my previous attempts at making Yorkshire pudding in my dutch oven I thought, why not give it a try?  There was nothing in the forecast indicating rainy weather but as I was lighting the coals it started to sprinkle.   My stubborn determination kept me from throwing in the towel.  Before the skies opened up I dumped as many coals as I could under the bottom and on the top of my 12 inch deep oven then ran inside to retrieve the batter and custard cups.  At that point it was pouring.  I threw everything in the oven as best I could and prayed I wouldn't get struck by lightning.  I jury rigged the umbrella to cover the oven but after the wind picked up, ended up holding it there for the rest of the cooking time.  The problem was, I couldn't correctly regulate the oven temperature and the rain had caused the coals to cool too quickly.  After 40 minutes I decided enough was enough.  All was not lost, the popovers did initially pop but soon fizzled and were more like soggy hockey pucks with a slight layer of risen crust.  I tossed them out for the birds and watched as the grackles struggled to take flight with chunks of them in their beaks.
I knew I could figure a better way to do this, once the skies cleared I relit the coals and went back for round two.  This time I preheated the oven for 10 minutes with as many coals as I could pile on the lid and 20 in a full spread underneath.  I turned my Camp Chef trivet over and placed it in the bottom of the oven.  On top of that I put 6 well buttered Pyrex custard cups, filled them with batter and immediately placed the lid back on the oven. I left them undisturbed and when I checked them after 35 minutes was thrilled to find the popovers browned and puffy.  I was amazed by how crispy they were and they did not fall after taking them off of the heat.  The reason my first batch was such a flop is because the coals were not hot enough due to the rain and I didn't allow enough time to preheat the oven.   You really can't go wrong if you follow these steps and remember the golden rule of popover making, a blazing hot oven and no peeking.  I found this recipe online at Allrecipes.

Lightly oil or spray a 12 inch deep dutch oven.  Place trivet in bottom of oven, you might have to turn it over so the popovers will not touch the lid.
Grease six 6 oz. custard cups.
Preheat oven with as many coals as will fit on the lid and underneath for 10 minutes.
In medium bowl beat eggs slightly.  Whisk in flour, milk and salt until just smooth, be careful not to over beat.
Fill custard cups half full.
Bake for 30-35 minutes in hot oven, 400-450 degrees.  Do not lift lid!  Immediately remove from cups and serve piping hot.  Makes 6 popovers.