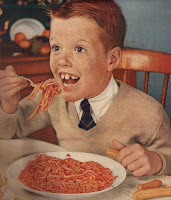 This rather unusual recipe piqued my interest because it gives you the basic formula for making one pot pasta.  Saute the Italian sausage, toss in uncooked spaghetti, water and sauce and in 20 minutes the pasta is tender and perfectly coated.  I added the layer of cheese and onions during the last few minutes of cooking but you could eliminate that step altogether or substitute with other toppings you like.  You could even use ground beef or frozen meatballs in place of the sausage.  I browned the sausage in my 12 inch oven over a full spread of coals then once I added the pasta and liquid, covered the pot with enough coals to keep it at a steady simmer, around 18-20.  After a few minutes be sure to give it a stir to keep the pasta from clumping together.  Definitely a kid friendly meal this could be made even simpler for camping by adding a can of mushrooms in place of the sausage.  Just remember, a jar of sauce, a half pound of spaghetti torn into pieces and a cup and a half of water and you'll always have the makings of a hearty, home style dinner.

Lightly oil or spray a 12 inch dutch oven.
Cook sausage and garlic over a full compliment of coals until browned, stirring frequently; drain.
Stir in uncooked spaghetti, spaghetti sauce and water.  Cover and simmer for 15-20 minutes or until spaghetti is cooked, stirring occasionally.
Top spaghetti mixture with cheese, bell pepper and French Fried Onions; cover and cook for 5 more minutes or until cheese has melted.  Serves 4-5.
Substitute other pizza toppings such as mushrooms, eggplant, olives or pepperoni for green bell pepper.