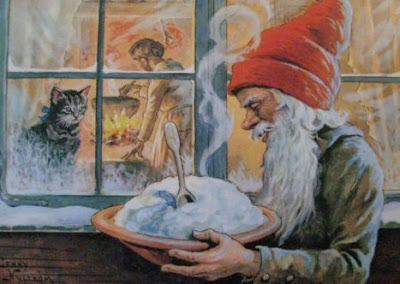 There are many recipes and methods for making rice pudding, some custard-like and baked in water baths and some simmered on top of the stove like this Julgrot or Yule Porridge from Sweden.  Swedish tradition holds that a bowl of this sweetened porridge is left outside on Christmas Eve for the tomte or elf who looks out for the family and animals in the barn.  If the mischievous tomte is not given his Christmas treat, he may wreck havoc on the family in the coming year.  The nice thing about this lovely pudding is that it can easily be made in your dutch oven and has probably been simmered in cast iron pots by farmer's wives in Sweden for centuries.  I made this in my 8 inch dutch oven and started out bringing the rice to a boil over a full compliment of coals and the lid completely covered with briquettes.  After 10 minutes, or once the water has been absorbed by the rice, move the bottom coals to a ring around the outside.  After stirring in the half and half I left the pudding to simmer with the lid covered with coals for a good forty five minutes.  Be sure to give it a stir halfway through cooking time.  Light and creamy, this comforting porridge will warm you on the coldest nights.  Don't forget to hide an almond in the pudding before serving, the lucky person who finds it will see their dreams come true in the year ahead.  Recipe courtesy of Patricia Sannit, from a Food Network episode of Calling All Cooks.

In an 8 inch dutch oven, over a full spread of coals, combine rice, 1 tablespoon butter, water and salt.
Cover with as many coals as you'll need to bring mixture to a boil.
Cook, covered, for 10 minutes or until water is just absorbed.
Add half and half, cinnamon stick, 1 tablespoon sugar and 1 tablespoon butter; stir well.
Move bottom coals to a ring around the base of oven.
Simmer for 45 minutes (stirring halfway) or until almost all of the half and half is absorbed.  The pudding should be creamy and tender, not mushy.
Add extra cream for richness, if desired.
Before serving, hide the almond in the porridge.
Serve hot with warm cream, cinnamon and sugar.

Email ThisBlogThis!Share to TwitterShare to FacebookShare to Pinterest
Labels: Desserts