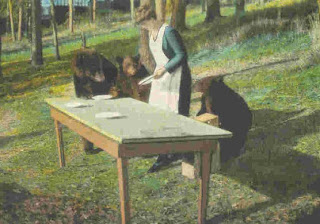 Kudos to the brilliant person who first thought of winding a slice of bacon in a cinnamon roll.  These Easy Bacon Cinnamon Rolls are the ultimate breakfast treat, hot, gooey, soft dough enveloped around a warm slice of bacon is nothing short of nirvana.  The best part is that you make them with Pillsbury Grand Cinnamon rolls so all you have to do is crack open the tube and wrap it around the bacon.  The rolls come 5 in a package so if you're cooking for more than a few people make a double batch, nobody, and I mean nobody, can eat just one.  Cook the bacon until it is still soft and pliable, don't let it get crispy.  Carefully separate the rolls, you may have to cut them with a serrated knife, then unroll them on a piece of parchment paper or the counter.  If you're a real bacon addict, there is room for two slices of bacon in each bun.  I only used one and left the outer portion of the dough strip uncovered so it would hold it's shape when I rewound the rolls.  In my 10 inch oven they baked with 10 coals in a ring around the bottom, 22 on the lid and were ready in 15 minutes.  Needless to say, frost while they are still warm and prepare to watch them vanish before your very eyes.  If you're a bacon lover, this will undoubtedly become your new favorite camping breakfast, blissfully start your day in the great outdoors with these sublime cinnamon rolls.

Lightly oil or spray dutch oven.
Cook bacon until lightly browned but still soft; drain on paper toweling.
Separate cinnamon rolls and unroll on parchment paper or counter.
Place 1 or 2 slices on inside of each unrolled piece of dough.
Roll tightly and place in bottom of prepared oven.
Bake at 350 degrees for 15-18 minutes or until puffed and golden.
Frost and serve while still warm.
Makes 5 rolls.