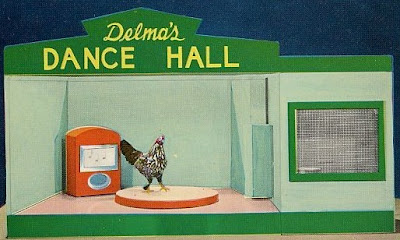 I was instantly drawn to this Cha-Cha-Cha Chicken recipe from Campbell's because not only is it one of those layer in your dutch oven and bake away kind of dinners but don't you just love the name?  Can't you see yourself saying Cha-Cha-Cha Chicken at a dutch oven gathering while you do a little dance step?  Be sure to spray or oil your dutch oven well because of the tomato based sauce.  In my 10 inch dutch oven it baked for 45 minutes with about 22 briquettes on the lid and 10 in a ring around the base of the oven.  Next time I think I'll try it in my 12 inch oven.  Don't be put off by the amount of onions, they cook down and flavor the sauce nicely.  The chicken is very tender and I would describe the sauce as piquant Tex-Mex meets Asian sweet and sour, nothing too overpowering, this tasty dish has a little bit of something for everyone.

Lightly oil or spray dutch oven.
Layer the chicken, onions and pineapple in prepared oven.
Stir the picante sauce, cilantro, brown sugar, ginger root, sherry and soy sauce in a medium bowl.
Pour the picante sauce mixture over the pineapple.
Bake at 350 degrees for 45 minutes or until the chicken is cooked through.
Serve the chicken and sauce with the rice.
Garnish with freshly chopped cilantro.
Makes 4 servings.

Email ThisBlogThis!Share to TwitterShare to FacebookShare to Pinterest
Labels: Chicken, Main Dish, On the Lighter Side