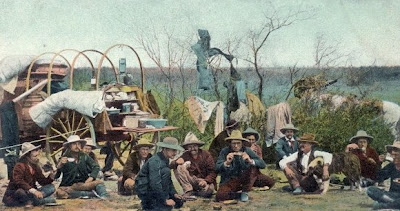 Pan de Campo or camp bread is the official state bread of Texas.  It is also known as cowboy bread and has been cooked over mesquite fires, feeding hungry ranch hands on the trail for hundreds of years.  In Texas they even have Pan de Campo cookoffs and like biscuit recipes, each cook has their own tried and true version of this primitive camp bread.  It's easy to see why it has become a chuck wagon staple, the basic ingredients are flour, salt, baking powder, water and lard.  The ingredients were easy to store and readily available.  Modern versions vary with the addition of milk, oil, and butter flavored shortenings.  The bread can be fried on a cast iron skillet or baked in your dutch oven.  I tried this recipe from Texas Highways, this prize winning recipe comes from chef Ruben Hinojosa of South Texas.  It seemed like a good place to start, the dough came together quickly and was easy to roll, you could even pat it into a circle in your dutch oven.  I did not preheat my oven as the recipe said to do, maybe that was why my bread broke apart when I flipped it over with a spatula.  You could probably bake the bread without turning it over and it would come out perfectly browned.   I baked the bread with 12 coals in a ring around the base of the oven and 24 briquettes on the lid.  The consistency of the bread is more like a crumbly biscuit than a typical flatbread.   It was light, crispy and served with a little butter and honey, a real delicacy.

Lightly oil or spray 12 inch or larger dutch oven.
Mix all ingredients but don't knead the dough too much.
If dough feels dry, add a few drops of milk.
Roll dough into a circle about 1/2 inch thick (thinner if you want a crisper loaf).
Place into well-oiled, preheated dutch oven; poke holes in dough with a fork to allow steam to escape.
Bake at 400 degrees for 10 to 15 minutes, turning dough over halfway through cooking time.
Cut into wedges and serve while still warm.