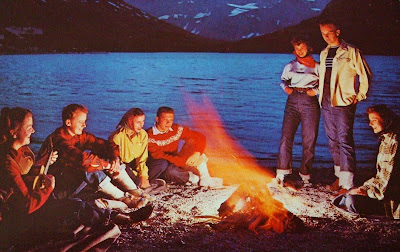 This simple little Lemon Cheesecake Coffee Cake from Pillsbury is bound to knock your socks off.  As easy as can be and the prep work can even be done at home, make the lemony filling beforehand, store it in a zip lock bag in your cooler, then snip a corner off of the bag and pipe the filling right into the cake at your campsite.  Basically, it's a giant cinnamon roll but as you rewind it leave enough space between the layers for the filling.  The recipe calls for 4 oz. of cream cheese but I added a couple more.  In my 10 inch dutch oven, it baked for 20 minutes with 10 coals in a ring around the bottom and 22 on the lid.  When you unravel the cinnamon rolls and place them in your oven you'll wonder how something so scrawny looking could ever be so good.  Trust me, this is one of those luscious recipes that is not only fun to make but incredibly tasty as well.  I think it would be a great project for kids and the fresh lemon juice and rind really gives it a tart, summery flavor.  I served it right from my dutch oven but if you want to lift it out and serve it on a platter be sure to line your dutch oven with parchment paper.  If you don't have a microwave to soften the icing, just spread it on carefully with a knife, also you will need a whisk to eliminate any lumps from the filling mixture.

Lightly oil or spray 10 inch dutch oven.
Separate dough into 5 rolls; set icing aside.
Unroll 1 roll into long strip of dough; reroll loosely and place in center of oven.
Unroll second roll; loosely wrap around first roll, cinnamon side in, replacing any cinnamon that falls off.
Repeat with remaining rolls, coiling dough in pan into spiral shape.
In small bowl, beat remaining ingredients except icing with whisk or electric mixer until smooth.
Spoon cream cheese mixture into zip lock bag; cut small hole in corner of bag.
With corner of bag halfway down into rolls, pipe mixture between strips of dough, starting at center and working to edge of pan, using all of mixture.
Bake at 350 degrees for 20-25 minutes or until center is thoroughly baked and edges are deep golden brown.
Meanwhile, remove cover from icing and microwave on medium for 10 seconds.
Drizzle icing over warm coffee cake.
Cut into wedges; serve warm.