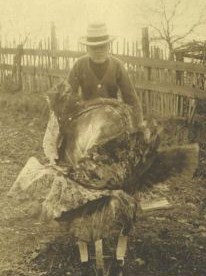 I found this recipe for German Red Cabbage in the Neiman Marcus cookbook, Pure and Simple.  The woman who submitted it wrote that it came from her grandmother's German mother-in-law.  Originally I thought I would just make the cabbage but decided at the last minute to add some pork ribs.  You could substitute the ribs with pork chops, bratwurst or even make the cabbage as a side dish.  Place your 12 inch dutch oven over as many coals as you can fit under the bottom.  Saute the ribs with the bacon until they are browned on both sides.  Remove the ribs to a platter while you add the cabbage mixture.  Stir the cabbage well and place the ribs or chops on top.  Move the coals to a ring of 12 around the bottom and cover the lid with 22-24 coals.  Leave it to cook, undisturbed for 50 minutes or until cabbage has cooked down and ribs are tender.  If you decide to just make the cabbage, saute the bacon then add the cabbage mixture and bake for 45 minutes.  With or without the pork, this sweet, tangy cabbage is a real delicacy.

Lightly oil or spray 12 inch dutch oven.
Mix cabbage, apple, water, brown sugar and vinegar together in large bowl.
Season ribs with salt and pepper.
Brown bacon and ribs over a full compliment of coals until ribs are lightly browned on both sides.
Remove ribs from oven and set aside.
Stir cabbage into bacon drippings in dutch oven.
Lay pork ribs on top of cabbage.
Cover and bake at 350 degrees for 50-55 minutes or until pork and cabbage are tender.