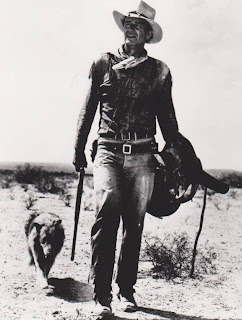 John Wayne is my all time favorite actor.  In honor of his birthday I thought it was fitting to make his favorite casserole.  His wife Pilar wrote that he was first served this cheesy, chili souffle at a brunch in honor of President Miguel Aleman of Mexico.  She would often make this for him when he went on location.  He would carry a copy of the recipe wherever he went, sometimes making it for his cast and crew.  I have made it twice, once in my 12 inch dutch oven and again in my 10 inch oven with the addition of evaporated milk and flour.  I am posting the recipe with the milk as it was a bit more stable and rose higher.  For a 12 inch oven place 10 coals in a ring around the bottom and 16-18 on top.  Check it halfway through to make sure it isn't browning too quickly.  Throw a wire whisk in your chuck box to beat the egg whites at your campsite.  It may seem like a lot of cheese but it melts down with the chilies making a rich base for the light and puffy egg souffle.  Put a John Wayne film in your DVD player and treat yourself to a plateful of this unbelievably delicious dish.  Perfect for breakfast, lunch or dinner.  This is taken from The Great Entertainer Cookbook from the Buffalo Bill Historical Center in Cody, Wyoming.  Supposedly John Wayne gave this recipe to one of the women who worked there in 1976.

Lightly oil or spray a 10 or 12 inch dutch oven.
Layer cheeses and chilies in bottom of oven.
Beat egg yolks slightly, then mix with flour, milk and seasonings.  Beat whites until soft peaks form, then fold into yolk mixture.
Spread evenly over cheese layer in dutch oven.  Form an overlapping border around the edge of the dish with tomatoes, pushing slices halfway into mixture.
Bake at 325 degrees for 30-40 minutes.